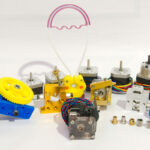 End of last year I decided to build a new 3D printer. At that time I already owned a very cheap Chinese Prusa I3 printer, it worked, but wasn’t a very reliable machine and it was dead slow. As I did not want to reuse any of the cheap Chinese parts of my old printer […]

Some time ago I wanted to buy a mearm from Phenoptix in the UK, unfortunately or maybe lucky for me it was out of stock. A little while later I bought a Prusa I3 3D printer. While browsing Thingiverse I stumbled on the mearm. Someone had converted the original mearm files to stl files so […]

I own one of these small action cameras (SJcam SJ4000). I bought it because it’s small, and easy to take with you wherever you go. To make nice stable videos I mount it on a mini tripod. This got me thinking that it would be fun to have a little motor between the tripod and […]